How to Name Your Mobile App, 7 Steps 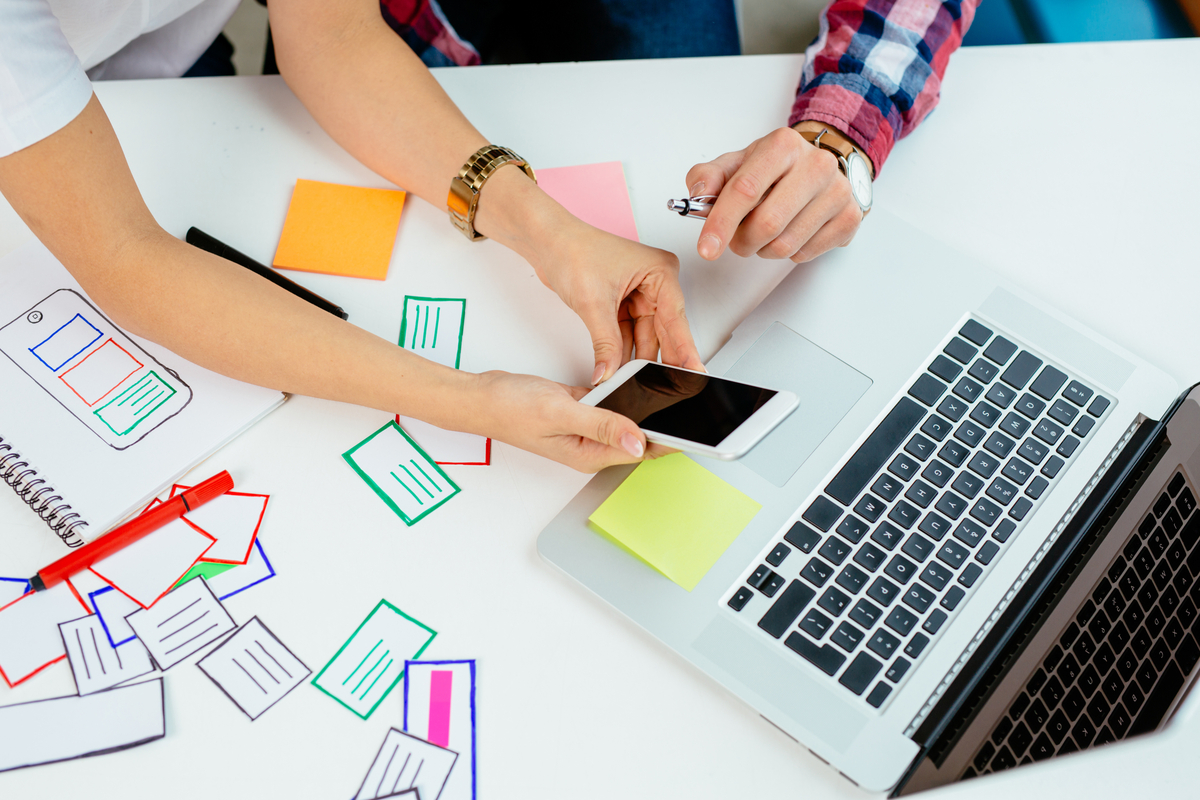 
With over 4 million apps in both Apple’s App Store and Google’s Play Store, what makes your app so unique? Your app may be innovative with superb features, but if you don’t have a good name, it’ll be pointless.

Your mobile app name and icon is the first thing online users see and defines their initial response. If they’re not your customers or referred to your app from someone, they’ll base their first impression on your app name and look. Research has proven that 31% of consumers download an app because the name sounds fun or exciting. So you can spend months on app development but choosing the app name is just as important. While a weak name isn’t the end of the world and doesn’t necessarily mean your app is doomed, it will have a bad first impression with users. So what makes a great app name? How can you come up with a name that stands out between millions of other apps?

With this guide, we’ll tell you all the factors that go into choosing a name. You’ll be able to create a list of names then you can narrow down to your favorite one.

What are the factors that help in choosing an app name?

To get a specific response from consumers, you need to find out what are the emotions you want to trigger when they see your app. Defining the purpose of your app is something you do in the development stage, but you should also know who your target audience is. For example, the emotions you’d want to trigger for a food service app is different than what you’d want to be triggered with a social networking app.

After setting your target audience, you need to ensure that the emotions you’ve triggered carry on with them throughout their whole user experience. For example, Goodreads has a descriptive name and gives a welcoming, warm feeling, and this is something that goes on after you log in with their warm toned colors, bookish quotes that show up with loading, and in all their pages.

Once you’ve figured out what emotions you’re after, it’s time to put it in words. This calls for brainstorming! Get a group of your friends or work team together and search descriptive words and images in your category. Make sure to research the searchable words that consumers use to try and include it in your name. For example, Photoshop has the descriptive word photo in its name to let consumers know it’s a photo related app.

But remember not to get too wild and focus on using words that don’t have double meanings like the word bash, which could mean to try to do something or it could mean to smash or hit. Also, avoid using offensive, sexual, or profane words in your name because it will evoke negative emotions. You should also keep in mind if the word as a double meaning in a different language

2- Hint at the app functionality:

If your icon gives nothing away of what the app does, then your app’s name should. Users need to understand what your app does before downloading it. For example, Pandora, if you don’t already know the brand, you wouldn’t understand what Pandora is, but from the app icon (the O-shaped ring) you get that it’s a jewelry app. You need to make it as clear as possible to encourage people to download your app instead of the one after it. For business apps, you can use your app to increase your brand recognition. Your current customers would already know what your app is for but for new customers that see your business name with nothing clear in the icon would have no idea.

An app called Litsy, for example, is subtly referring to literature in its name but to ensure users that its book related, they have a stack of books as their icon. If you’re a startup and want to build a stronger name for your business, naming your app your business name won’t be enough, you’ll need to back it up with a distinct icon. Well-established brand names like Amazon or eBay can do this because they already have strong businesses, but even Amazon has a shopping cart in its icon. And so, choose a name that consumers will recognize and can easily understand.

Also, keep in mind that Apple’s App Store and Google’s Play Store have a strong policy against using irrelevant or spamming names. They can reject your app entirely if it doesn’t suit the app’s functionality.

3- Be original with your name:

It would be easy to ride on the success of your predecessors, like if you have a photo editing app and you name it instaphoto or instapic to mimic Instagram. This has been done a thousand times before so what makes your app any better?

It will be a familiar name for consumers, but it would risk your legitimacy. So if the app function isn’t innovative and has been done before, your name has to be unique. Some of the most successful apps have standalone names without hinting to their function like Asana or Shazam, but they gained their reputation because of they’re different.

It’s okay to sneak peek at the trendy names and try to come up with something similar, like putting a y at the end of the name like Calendly or replacing the “i” with a “y” like Lyft. Another popular trend is smashing two words together like Evernote or SoundCloud. But most importantly, you need to be creative with your name.

It is almost always recommended to make your app name one word. It is straightforward and would be easy for users to remember. But even if you’re going for more than one word, it should always be 11 or fewer characters or else it would be too long and could get cut off. It can even be two words like Hubspot or Postmates but should flow smoothly and not be hard to pronounce.

Six things you should avoid when naming your app:

5- Learn from your competitors:

If your app is one with a crowded market, there are tons of apps out there with your same functions and features. The best way to grow is to learn from those who’ve done it before you, so do your research. Look into other apps in your same category, get a feel of their app names, icons, images used and see what you can come up with.

We’re not saying you should copy the apps out there but taking a page from their playbook isn’t a bad idea. There are strong policies against copying another app’s name in both the App Store and Play Store; a name that is even similar to an existing app can get rejected. There’s also something to learn from the apps that aren’t too successful, see what they’re doing and avoid it!

We’ve stressed on the first point not to copy other app names because your app can be rejected, but you also need to consider trademark issues. Running a quick name sure is not enough to verify your name; it can still violate other trademark rights beyond the App Stores.

Violation of trademark can be beyond app name, and it can be a conflict in-app colors, the logo, or anything else. This will also save you the trouble of developing an app and coming up with a name then discovering it’s already taken by someone else.

You can use the Trademark Electronic Search System (TESS) which is the database of every registered business in the US, to make sure your app name is yours only.

Besides coming up with a great name, you need a name that is easily searchable and pushes your ranking higher in the App Stores. With higher rankings, users will be able to find your app through targeted keywords and other marketing strategies. Research has shown that 20% of app downloads are apps in the App Store that were found through keyword search engines.

The limit for the app name is 255 characters, but the first 25 characters are the ones that really matter. They are the ones that appear in search results, and so, it is essential to use the high-traffic keywords in this section. Even big companies use this strategy, for example, Trip Advisor, the popular travel app, is called “Trip Advisor Hotels Flights Restaurants.” So you need to make sure your most descriptive words (meta-data or mini-descriptor) are within the first 25 characters.

This doesn’t mean you should stuff keywords, using the same keyword twice wouldn’t push your ranking higher. Use Google Keyword Planner as a tool to find highly-searched keywords in your category.

Another thing to remember is to confirm your app name is available as a domain name and on social media platforms. It would be pointless to build an app and name it but not be able to market it because another business has the name. You can check the domain name availability on godaddy.com or instantdomainsearch.com.

An app name is just as important as the app itself; it gives meaning to your app. Take your time picking a name and don’t rush it. You need to consider all factors, brainstorm all your ideas, get an outsider opinion, do your market research, and write it all down. This is the name that will set your app apart from the millions of other apps out there to give it its time and focus.

But of course, don’t wait too long because someone else can claim it if it’s not registered in the app store. You only have one shot to make a first impression, so make it count!